Supporting the finale of the Formula 1 world championship, the weekend’s events featured a practice session, qualifying and two 23-minute plus one lap races that took place around the Yas Marina circuit.

Sharp, who started racing single seaters when he was just 13, proved to be the fastest driver in both races, bringing it home clear at the front on both Saturday and Sunday. 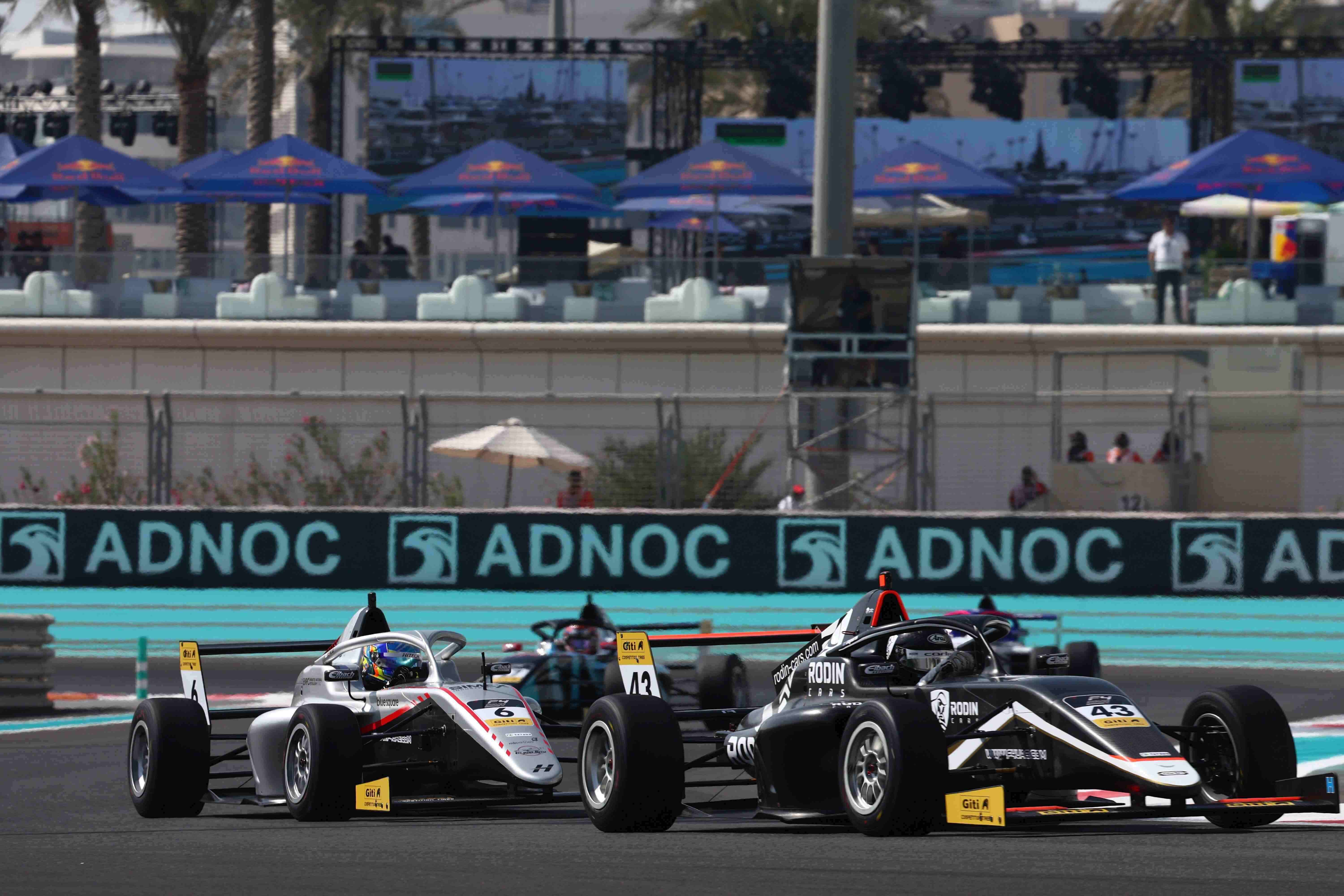 Dunne’s hopes of converting his qualifying pace in to a race win got a boost at the start when his run to the first corner was made cleaner after Rifai stalled on the grid. Dunne made the most of his opportunity to pull clear at the front, pursued by Sharp, as Xcel’s Viktoria Blokhina dropped down the order after spinning at the long left-handed Turn 9 corner.

At the end of the opening lap, Dunne was 1.2 seconds ahead of Sharp, who was being pursued hard by Keanu Al Azhari, with a three-way fight for fourth opening up behind them involving Hitech’s James Piszcyk, Carlin's Costas Toparis and Hitech’s Kanato Le.

On the second lap, Toparis passed Piszcyk for fourth place, whose pace then began to fall away as the lap progressed. By this stage, second place Sharp’s speed was ramping up and he was within half a second of leader Dunne, as the pair were 1.5 seconds clear of third placed Al Azhari.

On lap four, Sharp looked around the outside of Dunne at Turn 9 and, having got his car into a good position, was eventually able to snatch the lead as they headed to the hotel complex. He was ahead as they crossed the line by less than one second, with their battle having allowed Al Azhari to close in to within one second.

Sharp clearly had better race pace and, once he was in front, he was steadily able to build up his advantage to more than five seconds at the end of lap 13, when the chequered flag came out.

While Dunne was unable to match Sharp’s pace, he was able to keep himself clear of Al Azhari, who managed to get himself within one second of second place but ran out of laps to move up a position.

With Toparis and Le bringing it home without trouble to finish fourth and fifth, the main drama was behind them as the recovering Rifai battled through the field. The Xcel Motorsport driver had got up to eighth by lap five, and on lap 10 had a good look at snatching seventh from Piszcyk at Turn 9. He couldn’t make the move stick then but did take the place a lap later as he got a good run down the back straight.

He then secured sixth on lap 12 after Matteo Quintarelli lost two places and dropped to seventh, before he then fell back behind Sebastian Murray on the final lap. 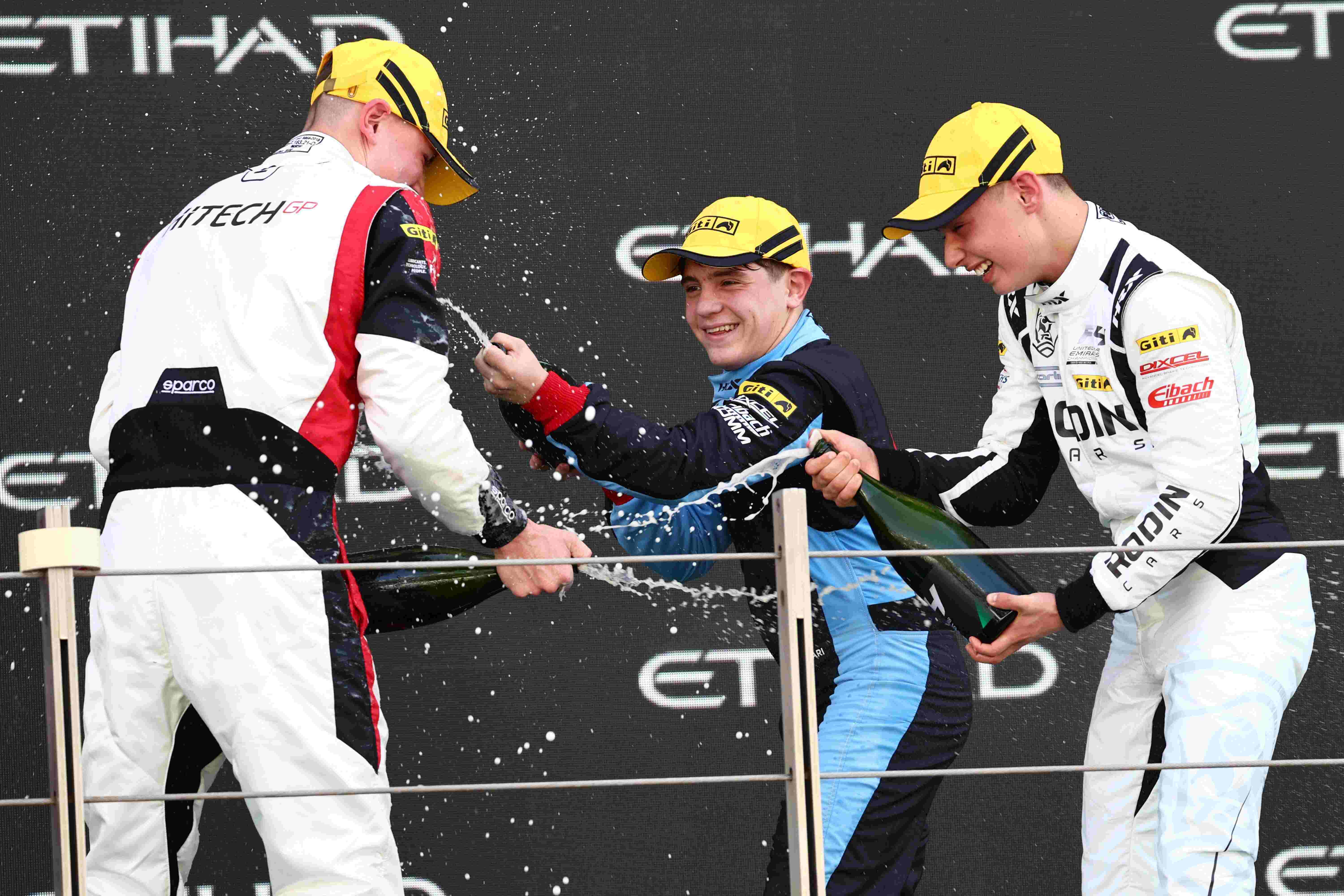 The grid for Sunday’s race was decided by the order of fastest laps from Saturday’s race, which meant that Sharp started from pole position ahead of Dunne, Toparis and Al Azhari.

At the start, the two front row starters both got away equally well from their grid slots, but then nearly tangled at the first corner. Approaching the left hander, Sharp was ahead but Dunne took a look down the inside in a bid to snatch the lead. With neither driver giving an inch, there was a small touch.

This contact was enough to result in Sharp to run slightly wide, but he maintained his momentum and was able to keep the lead on the run up the hill.

Down into the hairpin, Dunne had another attempt to take the lead as he dived for the inside and briefly locked up, but Sharp was again able to stay out front. Dunne had not given up on gaining the front spot, however, and, after picking up a slipstream on the run down to Turn 9, he went for the inside – leaving him and Sharp side-by-side through the swooping left hander

Sharp was run wide by Dunne on the exit and, as he rejoined as they headed for the sharp right hander at the hotel, the battling leaders clashed – and the contact meant Dunne lost his front wing and had to come into the pits for repairs.

With Dunne’s front wing left in the middle of the track, and Piszcyk and Quintarelli also making contact, the safety car was called out. As they crossed the line under caution, Sharp led from Al Azhari, Toparis, Le, and William MacIntyre.

The race restarted on lap five, with Sharp fending off a brief challenge from Piszcyk at the first corner as they got their tyres up to temperature.

Further around the lap, Le managed to pick up a tow from the third placed Toparis on the back straight and was able to move up to a podium spot at the chicane – with his rival also dropping behind MacIntyre on the way out of the corner.

As Sharp began to pull clear at the front, the recovering Dunne triggered more drama after a late braking move at the Turn 6/7 chicane on lap six left him making contact with Toparis – and losing his front wing for a second time, triggering a second safety car period.

The field got going again at the start of lap 11, with Sharp having no problem this time in getting clear in front at the restart. Behind him, second placed runner Al Azhari found himself under pressure from Le, as they ran side by side down the main straight. Le was able to make his move stick and moved up to second place at the chicane.

The gap between Sharp in front and Le in second then stayed stable at just less than two seconds before the race finished at the end of lap 11. Al Azhari came home in third place, ahead of MacIntyre and Rifai. Behind them, Dunne had got himself back up to sixth, having avoided contact with other cars and a wild moment at the end of straight chicane on lap 10 that had helped him get past eventual seventh placed finisher Viktoria Blokhina.

After the race, however, the stewards handed Dunne a 10-second time penalty for pushing Sharp wide during their Turn 9 battle on lap one. That dropped him down to 10th on the final classification. 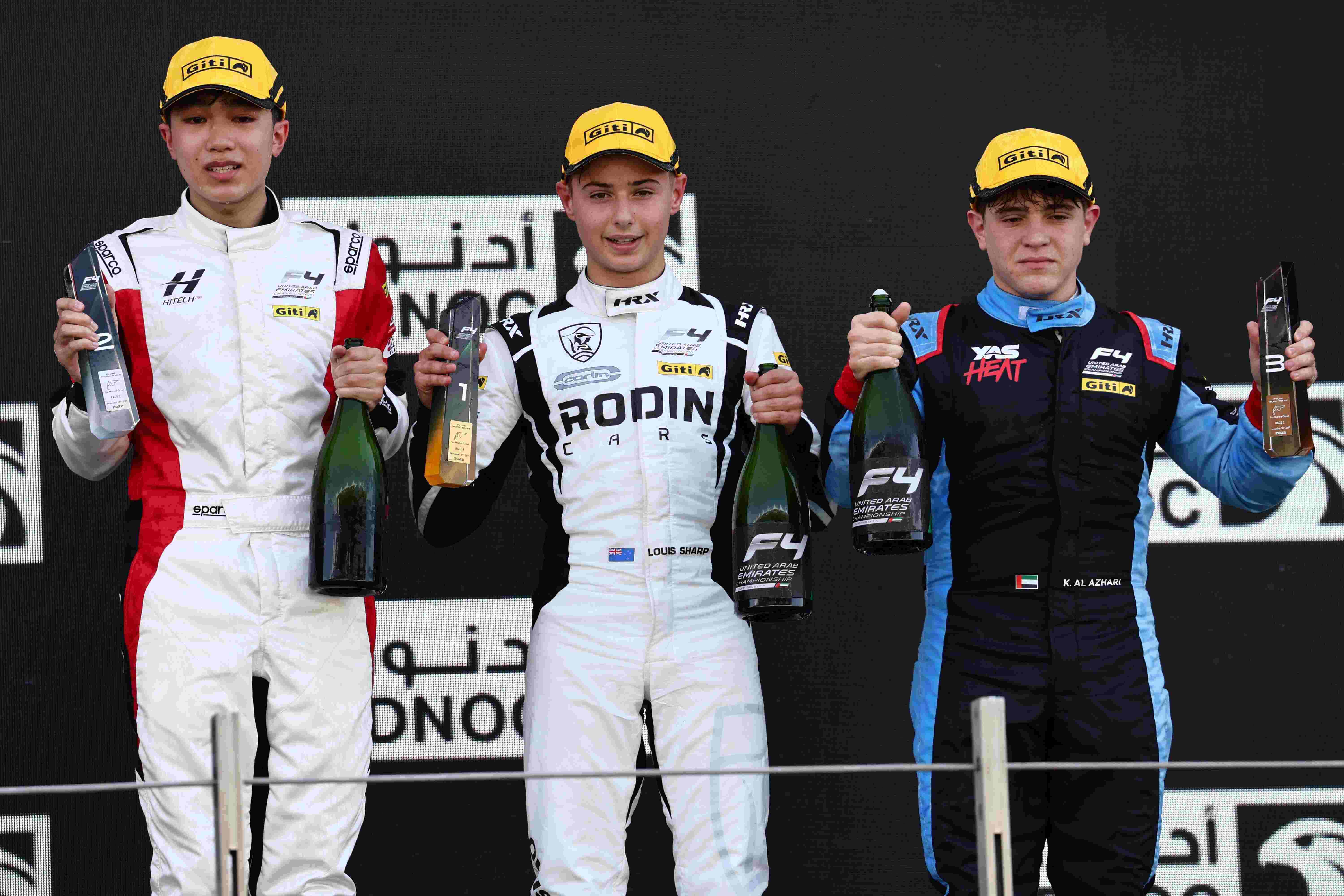 The 2023 F4 UAE Championship season gets underway with a pre-season test at the Dubai Autodrome on January 9-10.

About EMSO
One of the oldest national organizations in the United Arab Emirates, the Emirates Motorsports Organization (previously the Automobile & Touring Club of the UAE), has played a leading role in the development of motorsport at both national and international levels since its inception in 1965.